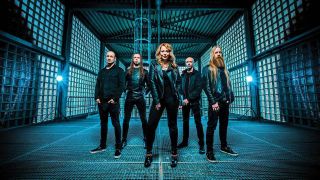 From her early career with Dutch prog metal crew The Gathering and numerous collaborations with Devin Townsend to her own multifarious work as a solo artist, Anneke Van Giersbergen has been a trailblazer in heavy music for over 25 years. That said, it’s been a long time since she’s fronted a bona fide metal band. Consequently, the arrival of Vuur (Dutch for “fire”) and their monstrous first album In This Moment We Are Free – Cities should be cause for celebration. An epic and often complex progressive metal record, Vuur’s debut confirms that Anneke is still a metalhead at heart.

“I’ve always had many different sides to what I do,” she tells us. “I do a lot of acoustic and classical shows, especially in the Netherlands, and some of my solo records have been more pop-rock than metal. There are probably a lot of fans that don’t realise I do anything this heavy! But the time just felt right to do this. I’ve been listening to a lot more heavy music recently and metal is my home.”

Vuur came together after Anneke toured under the moniker The Gentle Storm, her 2015 collaboration with prog legend Arjen Lucassen. After expanding the band’s repertoire to include songs from the singer’s past – Devin and The Gathering included – it soon became apparent that this initially temporary project had such potential that Anneke couldn’t resist the chance to harness its momentum.

“It was amazing performing with these incredible musicians every night, and I realised that this was a really great band – so I wanted to keep it for myself,” she smirks. “I started writing songs and I just felt inspired. I asked everyone if they wanted to be part of Vuur, and they all said yes. This isn’t just some project, it’s a real band and I think you can feel and hear that.”

Comprising 11 mini-epics, each inspired by and dedicated to one of the well-travelled vocalist’s favourite cities, In This Moment We Are Free is arguably the heaviest record Anneke has ever put her name to. Her only concern at this point is that she has unconsciously borrowed a few ideas from her most frequent collaborator…

“Devin’s been a big influence on me, of course. I hear lots of parts that sound like him, but hopefully it’s not too much!” she laughs. “He’s a genius, so if I’m going to steal from anyone, it might as well be him.”

An exciting new chapter in a rich and eventful career, Vuur promises to propel Anneke to her rightful position as a true modern metal great. Whatever happens, however, she is undoubtedly having the time of her life.

“I’m already writing songs for the next Vuur album,” she grins. “I can still do all the gentle, quiet things that I love to do, but you can’t beat the feeling of being onstage and singing with this incredible power behind you. We’re going to be really busy touring for the rest of this year and all of 2018, and I can’t wait!”

In This Moment We Are Free – Cities is out now and can be ordered here.

Devin Townsend: "I should never have taken a shit in Steve Vai’s guitar case"