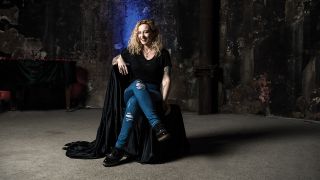 I t’s been a decade since Anneke van Giersbergen left The Gathering, the band that first brought her fame, to strike out on her own. In those 10 years, she’s lent her creative energies to a host of projects, from collaborating with Devin Townsend, Danny Cavanagh and Arjen Anthony Lucassen to releasing solo albums and recording and touring with The Gentle Storm. Now she’s set to unleash her heaviest music to date with her new band VUUR – which means ‘fire’ – on In This Moment We Are Free – Cities. Where does she find the time?

“I love singing so everything people ask me to do, most of it I say yes to,” says van Giersbergen. “My husband Rob, who is also my manager, has to stop me a lot of times: ‘You really physically don’t have time to do this.’ Having said that, I did everything in the last 10 years and I feel like I need to focus more on a few specific things. Maybe you can say it’s the same as being married for all this time, then you break up and you do it with everybody and then it’s out of your system and you’re relaxed again. Then you can… I wouldn’t say settle down, but I would say focus on a few things that I love the most.”

VUUR share plenty of personnel with The Gentle Storm, the band founded by van Giersbergen and Lucassen. Joost van den Broek has switched from playing keys to producing and co-writing, while drummer Ed Warby, guitarist Ferry Duijsens and bassist Johan van Stratum all contributed to The Gentle Storm before joining VUUR.

“Arjen and I put a band together just so we could tour with The Gentle Storm and I realised halfway through, ‘Holy shit, this is such a good band,’” says van Giersbergen. “The players are really good and they’re such nice guys. I thought, ‘If I’m going to do this, I’m going to do this now, with them,’ so I asked them, ‘Will you join me in a new band?’”

Despite the familiar faces behind the scenes and in front of the camera, plus new kid on the block Jord Otto as lead guitarist, the two groups sound completely different. Where The Gentle Storm had strong folk and classical influences, VUUR have their feet firmly planted in progressive metal, with a dash or three of djent in the pummelling attack of Otto and Duijsens’ twin-guitar onslaught.

“It’s a funny thing,” says van Giersbergen. “We wrote on a six-string with a drop tuning. Neither Joost nor me can play a seven-string but we always worked in a key that was good for a seven-string because we had guitar players who play seven-strings and our bassist has an extra string so it’s going to be extra low, low, low. We had distinctive ideas about how fresh but heavy it should sound.”

A second factor in selecting the line-up was van Giersbergen’s desire to have younger players in the group – roughly a decade separates VUUR’s frontwoman from her guitarists. “I’m an 80s kid so I grew up with a different sound,” she says. “In prog music, I listened to Yes and Pink Floyd and it’s all warm-sounding, and with the new guys in the band, 10 years makes a big difference.

“I thought it was important to surround yourself with people just a little bit younger so the gap isn’t too big – you understand each other but you keep being fed fresh ideas. Plus I wanted a different sound. I wanted to be heavy and dark but maybe catchy or epic. I didn’t want any restrictions.”

As much as the young gunslingers bring their fire to VUUR, it’s not a one-way dialogue between the musicians and their bandleader, as borne out by van Giersbergen’s exchanges with guitarist Otto.

“He’s a fantastic solo player – he’s very skilled and he can play really fast,” says van Giersbergen. “I ask him all these questions because I love playing guitar but I’m obviously not that good in that way, and then he’s asking me questions. Because I do a lot of solo shows, I play a lot of acoustic guitar and I could teach him a thing or two on the acoustic – simple things, melody things. I was actually proud that I could teach him about playing guitar.

“They’re so unbelievably good at what they’re doing, it’s like, this is the song I wrote, this is the whole structure and everything is good, now we play it and they kick it in the butt and make it so much better.”

Then there’s Ed Warby behind the kit, one of Holland’s top metal drummers, whom van Giersbergen calls “a living legend” from his impressive body of work with Gorefest, Ayreon and Hail Of Bullets.

“When you’re writing, you think you know Ed’s drumming,” says the singer, “and in your head, you think, ‘Okay, Ed can do this here and he can do something like this there and then it’ll take this part to the next part when he does this.’ Then he comes up with something 10 times as cool as you ever could imagine.”

The sheer heaviness of VUUR brings its own challenges for van Giersbergen, as their music demands all of her power as a singer.

“I realised when we were done with the album, everything is full-on, vocal-wise,” she says. “There are a few passages that are quiet, but most of the stuff is really belting it out, whereas The Gentle Storm had a lot of soft songs and soft passages. I was thinking if we do headline tours, I don’t know if I can do that for one-and-a-half hours for 30 days straight. We’ll see. Maybe we’ll do an acoustic bit in the middle. But it’s a good energy.”

The 11 tracks on In This Moment We Are Free – Cities share a common theme, as each song is about a different city. “Sometimes you go into a city and you immediately feel a vibe or it triggers something,” says van Giersbergen. “Its culture, its climate and its people, everything can make you feel a certain way in a certain place in the world. Because we skip around so much, you could be in Moscow one day and then Istanbul the next and they’ll be totally different worlds. That makes you have these different feelings and triggers in a short period of time. That’s why I write a lot – I’m inspired a lot.”

In some cases, van Giersbergen imagines a location as a character for one of her songs. “A city like Istanbul, I really see a big guy hanging over the city with a big sword, my warrior,” she says, “but I did also sometimes write about something that happened in a city. For instance, for London I wrote about the Great Fire, but I always write poetically, so in this case I write about the fire speaking to the inhabitants and the inhabitants speaking to the fire. It’s never ‘Hey, this happened’ – it’s a poetic story. Sometimes it’s hard to talk about it because it’s moods and feelings and so on, but every city has a totally different angle.”

Van Giersbergen’s career has covered a huge range of musical styles far beyond the opportunities afforded to most musicians in the arenas of rock, metal and prog. She’s sung for the Dutch king and the Dalai Lama, while in May she’s going to perform with Residentie Orkest The Hague (The Hague Philharmonic Orchestra) for their Symphonic Junction concerts. Then there are her solo shows, and the Dutch-language album and live music show she wrote based on Frank Tashlin’s children’s book The Bear That Wasn’t.

“It was fantastic,” she says. “Playing for kids is completely different to playing for adults, but we had grandmothers, we had dogs in the audience, and also the occasional metalhead, people with Pink Floyd T-shirts who came to see us play because they were just interested. That makes metal and prog people so very open-minded. They check out everything. Because they like me as an artist, they’ll go, ‘Okay, I’ll go to a children’s play,’ and they buy the album for their niece. It’s nice.

“I can do everything I put my heart into. It’s an honour to be able to do that. I’m unbelievably blessed that things come my way.”

In This Moment We Are Free – Cities is out on October 20 via InsideOut. See www.vuur.band for more information.