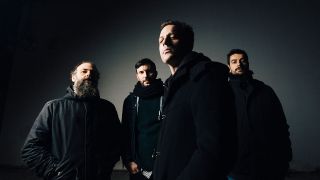 Spanish instrumental post rockers Toundra have released a video for their new single III.Akt. The song is taken from the band's forthcoming new album Das Cabinet des Dr.Caligari. The album will be released by InsideOut Music on February 28. The album celebrates the 100th anniversary of Robert Wiene’s iconic German silent horror film of the same name, acting as a new soundtrack for the film.

"This track is probably the most Pink Floyd oriented we ever did," the band tell Prog. "The music clashes with Alan's disappearance, Francis' best friend, the true main role in the movie. It's beautiful to see that the most collective act of the movie is also the one in which we started from improvisation.

"Das Cabinet des Dr.Caligari is a movie with a very strong visual energy. It's a film that takes elements of the terror movies to speak about authoritarianism. About how ideas can be controlled and eventually lead a human individual to do the worst things.

"It was premiered in between-war period, and it represents an advice about the real danger of some ideologies that nowadays are getting a new life across Europe; ideologies based in intolerance. That's why we like to see this film as historical document that invites to some conscious thinking rather than let ourselves go where intolerants want to take us."

The band have announced a string of tour dates at which fans can watch the film while they perform the soundtrack.