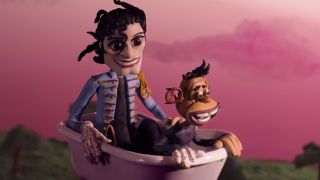 A still from Bubbles Burst video

The Claypool Lennon Delirium have released their video for track Bubbles Burst.

It’s lifted from the recently launched collaboration between Primus mainman Les Claypool and Sean Lennon, Monolith Of Phobos, which is now available to stream in full.

The promo features comedians Noel Fielding and his brother Mike starring as the late Michael Jackson and his pet chimpanzee Bubbles. Lennon says he and Claypool came up with the video concept after he recalled the time he spent at Jackson’s house as a child.

Lennon tells NPR: “I think it’s important that even if people don’t believe me or are angry about the way Michael Jackson is portrayed in the video, that the truth is my intention is very sincere and harmless, and I’m just making a song.

“I’m not trying to take him out or anything, or put him down. I was just trying to have fun and talk about an odd situation in a way that makes it art.

“It’s like a parallel dimension, and it’s a dark, comedic manifestation that comes more out of the song and not out of real life. It’s like a reflection of a reflection.

“As a visual poem, I think it represents something real. Michael was very lonely and he was weird and had weird interests. And he was in this kind of Peter Pan universe – this bubble he’d created for himself. And there’s something dark about that. There’s something sad about that.”

Monolith Of Phobos can be purchased on iTunes.