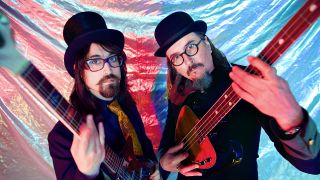 Sean Lennon’s post-rock band Ghost Of A Saber Tooth Tiger toured with Primus last summer, and he hit it off so well with Primus bassist/vocalist Les Claypool that they formed The Claypool Lennon Delirium. Their oddball debut Monolith Of Phobos, recorded at Claypool’s Northern California studio Rancho Relaxo, is a cosmic collision of two highly individual artists. Kaleidoscopically creative, joyfully melodic and saturated with vivid musical colours, it’s an engaging trip populated by genies, monkeys, millennials and mucky old men – harking back to the classic psych of the late 60s, and served up with a modern twist. Now 40, Lennon discusses his new cochise, why this isn’t a ‘retro’ record, and his parents’ influence on his music.

You’ve been a Primus fan since you were a kid. Do you have a favourite song?

Southbound Pachyderm. Les and I jammed it backstage and I played it with them on the tour. Les told me to play whale sounds. I had that dialled in on my pedalboard so that’s what I did [imitates whalesong]. It was perfect! We started talking about recording. The timing worked out, so I went up to Rancho Relaxo and we made Monolith Of Phobos very quickly. We wrote a song a day for two weeks and mixed it a month later.

He has this athletic, prodigal ability on his instrument. And he’s not just a great player, he’s singularly himself on bass. He has a totally original approach, which is so rare. I don’t feel that way about myself, so I was nervous going into it. It literally pushed me to do some scale exercises, which I’d never done before. Also he and I share a lot of aesthetic taste. We love certain chords and intervals, so whenever we jam I know what he’s going for, I can relate to the vocabulary.

Yes, or The Who’s Fiddle About. Les’s lyrics are edgy and provocative, but fun at the same time.

Did you two partake in the traditional psychedelic ‘stimuli’ up there at Rancho Relaxo?

The only mushrooms we picked were porcini mushrooms, and they’re legal, and huge – bigger than your fist. Les has his own winery [Claypool Cellars], and we drank a lot of his Pachyderm Pinot Noir. I learned a lot about burgundy grapes and whatnot. Tripping’s best done in the woods, then you take that inspiration home.

Phobos is a retro-sounding psych record but doesn’t really lapse into pastiche. You clearly have a good radar for that ‘line’.

I really don’t think it sounds retro. Les is the engineer and he has his own sound, which is less retro. It’s all so subjective. For me it’s whatever I like, which includes a lot of stuff from the greatest era of rock‘n’roll, the late 60s to mid 70s – you can’t really argue with that.

Yes, but when you hear a Mellotron or Leslie speaker, it implies a certain era…

That’s a fair point. We said, ‘Let’s do our prog/psychedelic band, a little trippy’. You’ve got to start somewhere. I think it sounds Primus-y in a lot of ways, and to me they still sound more modern than a lot of more modern bands.

The lyrics to Boomerang Baby are absolutely modern.

That’s my song about millennials, it’s about our love/hate relationship with cell phones and technology. It’s not just the young, it’s all of us – we’re on the verge of a destructive relationship with social media. It’s new territory, we don’t know how it’s going to affect our evolution as a society. I’m fundamentally optimistic though. The effect of having access to infinite data is unknown. It could have a really positive impact on society. Kids growing up now are much more expert in cool music. What music are they going to make? It could be a new renaissance of creativity. It might be mind-blowing.

But Ohmerica is a dim appraisal of the current political climate in the US.

We were worried about that one. I know it’s annoying when a musician sings about politics – people tell them to shut up or fuck off! But I’d been reading the paper and the whole Trump thing was starting, and it felt like the world, or America at least, was slipping into the ocean. Everyone is feeling that way I think. Les added the ‘seven dwarves’ vocal at the end to lighten the mood.

Do you ever just kick back and listen to, say, a Led Zeppelin record?

Jesus, of course! I taught myself to play, that’s how you learn, isn’t it? I don’t think there’s a Zeppelin song I can’t play. They’re a hard band to cop, it’s such a specific sound and people are keen to call you out on it. But even the Beatle-esque chord changes – as you can imagine I get a lot of shit about that – they’ve transmuted into so many areas of music, you can’t blame anyone for using them. It’s a paradigm as opposed to a group of records from one artist. I’m a terrible drummer but you can tell I’ve listened to John Bonham a lot. Bonham and Ringo are my only references for the drums.

You’re building such a convincing catalogue of work. Do you feel people are finally seeing past that enormous surname of yours and appreciating you on your own terms?

It’s hard to say, honestly. There’s so many times I felt positive about what I was doing and inevitably disappointment lurks behind the corner. Maybe because of trolling online, the older I get the more vehemently hateful sentiment I receive from a certain cross section of society. Hmm, maybe my answer would prove that, no, it has not changed.

Was your mum influential in your musical upbringing?

I remember playing mom Led Zeppelin, and she made me turn it off! She turned me on to Schoenberg and Kurt Weill, and Brecht’s Threepenny Opera. I didn’t get it as a child, but then as I got older, in college, I listened to Schoenberg’s string quartets, and in a way that’s ruined my career [laughs]. It gave me a love of certain notes that many people would find dissonant. That’s all solely because of my mom. She taught me about avant-garde artists, and the surrealists. She influenced me more than my dad, even though I’d admit to being incredibly influenced by him. My whole impetus for becoming a musician was because my dad was a famous musician and then he passed away. So it was a search for him, you know?

Can you listen to your dad’s music objectively? Can you shut off the ‘son’ part of you and listen to the Beatles purely as a musician?

No, I don’t think that’s possible. Can anyone do anything related to art in an objective way? Isn’t it all subjective, that’s the point. Besides, I don’t think it’s necessary for understanding the music. In fact, I think that gives me an insight into it that other people don’t have. I’m listening to my dad, not some guy I don’t know.

Monolith Of Phobos is out now and The Claypool Lennon Delirium are touring through summer. Do you think this is a one-off, or will there be more from you two?

We’re touring the States until September then we both have other things to do, but this really doesn’t feel like a one-off. I think we’ll do more. We’ll see.