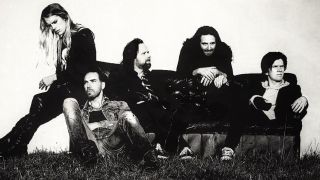 Pain Of Salvation have streamed their new version of 2002 track Rope Ends.

It’s taken from Remedy Lane Re:visited, the remix of groundbreaking album Remedy Lane, to be released on July 1 via InsideOut.

It was created in collaboration with engineer Jens Bogren, known for his work with Opeth, Devin Townsend, Haken, Symphony X and others.

The label say it offers a “new sonic take on the original recordings, as well as the intense full-album performance from the ProgPower USA festival in in 2014.”

The live album will be available separately as Remedy Lane Re:lived. A number of versions can be pre-ordered now.

Pain Of Salvation perform at the Burg Herzberg Festival on July 28 and join Yes on the 2017 edition of Cruise To The Edge in February. Last year mainman Daniel Gildenlow said their 10th album In The Passing Light Of Day would be a return to “a harder and heavier form.”

Pain Of Salvation: No Pain, No Gain