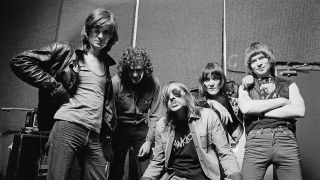 Rockfield Studios, the famous Monmouthshire recording studio, is to be immortalised in film.

The studio was used by Rush for the recording of both A Farewell to Kings and Hemispheres, by Peter Hammill for 1973's Chameleon In The Shadow Of The Night and 1975's Nadir's Big Chance, and by Van der Graaf Generator for Godbluff and Still Life.

Hawkwind recorded several albums at the residential studio, including 1975's legendary Warrior On The Edge Of Time while Queen recorded A Night At The Opera there.

Rockfield: The Studio On The Farm will have its world premiere at the annual South By SouthWest music event in Austin Texas on March 16. You can watch a trailer for the film below.

The film has been directed by Hannah Berryman, who made the BBC documentary The Brick In The Wall Kids about the schoolchildren who featured on Pink Floyd's 1979 Number One single Another Brick In The Wall Part 2, and centres around Kingsley and Charles Ward, the brothers who converted their farmhouse into the world's first residential studio.

Other notable artists from the rock world to use Rockfield include Robert Plant (1982's Pictures At Eleven) Judas Priest (1976's Sad Wings Of Destiny), Clannad (1987's Sirius), Budgie (who recorded most of their classic 70s albums at Rockfield), Motorhead (1979's On Parole) and Black Sabbath (1992's Dehumanizer).

More recently the studio has been used by Coldplay, The Stone Roses, Oasis, Simple Minds, Manioc Street Preachers, The Charlatans and many more.

Details of the film's more general release will follow.