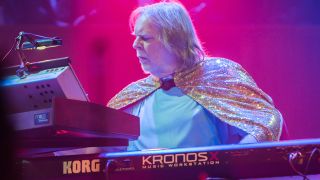 Rick Wakeman has released a new video trailer for his upcoming album The Red Planet. The album sees a return to his progressive rock roots after having several hit piano-based albums such as Piano Portraits (2017), Piano Odyssey (2018) and Christmas Portraits (2019). You can watch the trailer, which features the track Arsis Mons, in full below.

"I am completely blown away that the first extract from The Red Planet I released on YouTube had such a fantastic reception, over 20,000 hits over one weekend," Wakeman tells Prog. "So, I have decided to release another one - I hope the fans like one as much I do."

The Red Planet will be released in June on LP and CD, with the first 1000 vinyl units pressed on 180g red double vinyl, which will be signed and numbered and presented in a ‘pop-up’ cover.

Asked about the expectations of prog fans who are hoping to see the “prog fader turned up to 11,” Wakeman replies: “That could be a problem as it's already at 14!”

Both versions are available to pre-order.