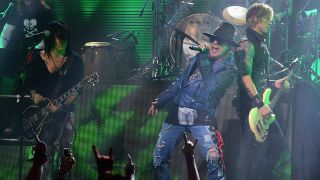 Richard Fortus says he hopes Guns N’ Roses will have new material out later this year.

The guitarist was speaking with Forbes when he was asked if he had any new information about fresh material, and if some of those songs could eventually be incorporated into their live set.

Fortus replied: “We love bringing new songs in. We always rehearse stuff up. It's just a matter of everyone sort of feeling comfortable to integrate it into the show. I hope that we have new music out this coming year.”

Speaking about songs from the band’s current catalogue that have yet to be played live, Fortus says there’s one track in particular he’s like to add to the set.

He explains: “Over my tenure in the band, which is now stretching to 18 years, there have been a bunch of songs we've rehearsed that we haven't done live.

“One I wish that we would, I really love the song, is Perfect Crime. I've played that with this band for years and we've just never played it live for whatever reason.

“This last tour we did Locomotive a few times and that was really cool. I love that song. And it was fun to finally do that.”

Fortus has spoken previously about the possibility of new Guns N’ Roses music, while Slash and Duff McKagan have also given their thoughts in the past.

Guns N’ Roses will return to the UK and Europe later this year on the latest leg of their Not In This Lifetime tour.