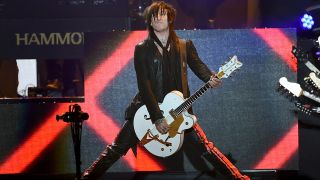 Guns N’ Roses guitarist Richard Fortus has said that a new album from the band could be on the horizon.

Back in August, Slash told Classic Rock they had plenty of ideas for a possible album, saying: “I think everybody thinks it’s a good idea and everybody would like to do it.

“There’s no shortage of ideas from everybody involved, but we’ve been so busy on the road there hasn’t really been time to go in and sit down and go, ‘Okay, we’re going to make a record.’”

But now that the mammoth Not In This Lifetime tour has drawn to a close, fans want to know more – and while Fortus isn’t giving much away, he tells KSHE.95: “We’re going to try and do another record and get it out soon. The band’s so great right now.

Asked if he thinks a new Guns N’ Roses single could be released before the end of 2019, Fortus replies: “It could definitely happen.

Then, questioned if the band already had new material, Fortus says: “Maybe. There might be stuff started. We’re hoping to get one out very soon.”