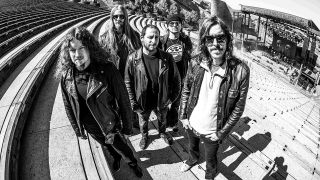 Opeth have released an animated video for their song Ingen Sanning Är Allas.

The Swedish language track appears on the band’s latest studio album In Cauda Venenum which launched back in September.

The striking video was created by South African animator and artist Jess Cope and follows “a melancholic and bitter man on the brink of self-destruction and insanity as he delves into a sinister alternate world as reality crumbles around him.”

Cope previously worked with Opeth vocalist and guitarist Mikael Akerfeldt on the video for Drag Ropes – his Storm Corrosion collaboration with Steven Wilson.

A video for the English version of Ingen Sanning Är Allas (Universal Truth) will be released in December.

Opeth are currently preparing to tour in India, China, Singapore and Australia before the end of the year and will head out on the road across North America with Graveyard in early 2020.

It was also recently confirmed that Opeth would headline next year’s ArcTanGent festival in the UK.

Akerfeldt said: “We're excited to play the ArcTanGent festival in Bristol. Been to Bristol a few times and it's always a pleasure. It'll be one of the last festivals we play that summer, so we want to ‘go out with a bang’ and need your help and participation to do so.”