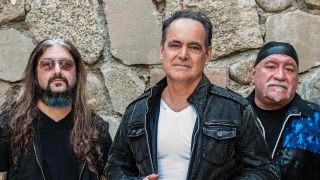 Neal Morse, Mike Portnoy and Randy George have released a video for their version of Jethro Tull's 1971 track Hymn 43 from the band's Aqualung album.

The single is taken from the third volume of their covers albums, entitled Cove3r To Cov3r, which will be released through InsideOut Music on July 24. You can watch the video in full below.

“When I was young and they packed me off to school, someone played me the second side of the Aqualung album by Jethro Tull and I was immediately consumed by it," explains Neal Morse. "Hymn 43 being one of my favourite tracks I was thrilled when the guys wanted to record this one. We kicked it out in one or two takes and it was a gas!”

The trio, who also play together in the Neal Morse Band, previously released a video for their version of Gerry Rafferty's Baker Street and Ringo Starr's It Don't Come Easy, both taken from the same album.