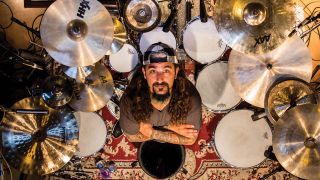 I left New York 12 years ago and I’ve been in North Eastern Pennsylvania ever since.

When I was 14 I went camping with some friends, I was super stoned and I heard the guitar solo to Rush’s Limelight on the radio. I’ve been hooked ever since.

Not long after that I bought both Rush’s Exit… Stage Left and Yessongs. I thought live albums would be good crash courses into their music.

Rush again, December 1982 at the Nassau Coliseum on Long Island. It was their Signals tour. Rory Gallagher was supporting.

I can’t go anywhere without my iPad, iPod and iPhone. I also carry around some two-terrabyte discs full of music, movies and TV shows.

What are your guilty musical pleasures?

If there’s one subject I’d be hands-down the king of, it’s The Beatles. I’m a Beatles trivia nut!

In 1989 I paid a scalper $400 for a ticket to see The Who play Tommy at Radio City Music Hall, New York, and it was worth every cent. To me it’s one of the first concept albums. I wept like a baby at the Overture.

I’ve played Wembley Arena, Budokan, but Radio City Music Hall is such a classy venue. The one that’s still on my bucket list is the Royal Albert Hall.

I’m an avid film buff. I have a home theatre and thousands of films from directors like Stanley Kubrick, David Lynch, PT Anderson, the Coen Brothers. I track every film I watch on letterboxd.com.

I’ll give you one living, one dead: Roger Waters and Frank Zappa.

[He escorts Prog through his office – an Aladdin’s cave of thousands of CDs, DVDs, box sets, books, drums, Beatles and Kiss toys, signed vinyl and more.] Yes, I am a collector.

Hang, from Foxygen. They’re a prog/pop duo that sound like ELO meets Bowie. And the new Nova Collective album [The Further Side]. That’s Richard [Henshall] from Haken and Dan [Briggs] from Between The Buried And Me.

Cruise To The Edge earlier this year was the ultimate prog gig. Haken, Pain Of Salvation and Frost* were all amazing.

I’ve been with my wife for 27 years and she hates prog! If I’m playing with Avenged Sevenfold she loves it, but Transatlantic? No. I’ve never been able to convert her to the prog side.

Who do you call in the prog community for a good night out?

Damon Fox from Bigelf. We get together and shoot the shit about music and just geek out.

God, there’s so many: Heart Of The Sunrise, Firth Of Fifth, Nights In White Satin, but Starless by King Crimson is the quintessential prog epic.

My buddy Mikael Åkerfeldt. We talk about it all the time, but we’re both so busy.

Which prog album always gets you in a good mood?

Jellyfish’s second album Spilt Milk is so experimental, like Pet Sounds meets A Night At The Opera. There’s so much depth to it.

Runner-up is Yes on the Union tour – seeing all eight of them together was incredible. But my favourite gig of all time was Roger Waters doing The Wall, at Madison Square Garden then Philadelphia Stadium. It was the most overwhelming experience: no show could be bigger or better.

What is your all-time favourite prog album cover?

The Rolling Stones’ Their Satanic Majesties Request. Just look at it – it’s the proggiest cover ever! Stones fans hate this album but I love every song on it – Citadel, In Another Land…

I love Neil Peart’s books. Ghost Rider: Travels On The Healing Road, about the trip he took after his family passed away, is incredible.

You’re always busy. What are you up to at the moment?

I’m touring with the Neal Morse Band, and have some shows with Shattered Fortress over the summer, with an exclusive date in London on June 28. We’ll be playing Dream Theater’s Twelve-step Suite and other songs. I’m 50 this year, so I’m putting all that to bed…