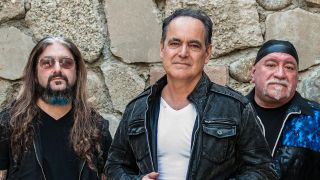 Neal Morse, Mike Portnoy and Randy George have released a video of their cover of Gerry Rafferty's 1978 hit Baker Street. The single is taken from the third volume of their covers albums, entitled Cove3r To Cov3r, which will be released through InsideOut Music on July 24. You can watch the video in full below.

“Baker Street is one of the songs that is instantly recognisable," says Randy George. "When I first mentioned the idea of doing Baker Street, Neal said that it was funny because he and Mike had just been discussing that one as well.“

“To be honest I was never that big of a fan of this song," adds Neal Morse. "It’s one that Mike really wanted to do as I recall. But as we dove into it and I began singing it, I really felt it. Lyrics about thinking that it’s going to be really easy to succeed and then hitting walls and becoming disillusioned are very relatable to me. I found myself really digging into it and taking a kind of The Who approach to the song really works well!”