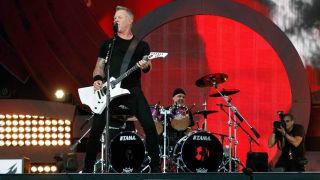 Metallica have released a video for their new song Moth Into Flame.

The thrash giants previously released a short teaser snippet of the track and have now issued a promo, which can be viewed below.

It’s the second track to be unveiled from Metallica’s upcoming 10th album Hardwired… To Self-Destruct, which is set for release on November 18. Last month, they issued a video for the track Hardwired.

Moth Into Flame was premiered earlier today on Howard Stern’s show on SiriusXM, where the band had been performing a live set of new tracks and older classics.

Metallica performed at the Global Citizen festival in New York at the weekend and their five-song set was made available to watch in full.

Announcing the album details last month, Metallica said: “Hardwired… represents the next phase of our journey as Metallica and we are so excited to share it with you.

“Produced by Greg Fidelman, along with James Hetfield and Lars Ulrich, the album and is available for pre-order in a variety of configurations including 12 songs on a double CD, vinyl, digital download, as well as a deluxe version with the riffs that were the origins of the album.”

Metallica also announced today that they’ll help open the new Royal Arena in Copenhagen, Denmark, with two performances on February 3 and 5 of next year.

Tickets for the shows, which are so far the band’s only European gigs of 2017, will go on general sale at 10am CET in September 30 via Ticketmaster.