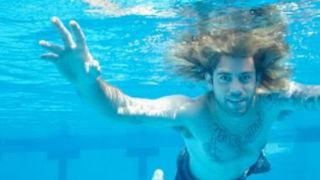 The baby from Nirvana’s Nevermind has recreated the album sleeve 25 years later.

Spencer Elden celebrated the 25th anniversary of the release of the classic album at the weekend, although he kept his swimming trunks on rather than strip off completely.

Elden, now 25, was four months old when he was photographed for the cover of what would go on to be one of the biggest selling albums of all time.

Released in September 1991, Nevermind has sold more than 10 million copies worldwide and Elden will forever be known as ‘the Nevermind baby.’ He previously recreated the album art for its 20th anniversary.

The latest recreation saw Elden team up with the New York Post – and he wanted to be as authentic as possible.

He says: “I said to the photographer, ‘Let’s do it naked.’ But he thought that would be weird, so I wore my swim shorts.

“The anniversary means something to me. It’s strange that I did this for five minutes when I was four months old and it became this really iconic image.

“It’s cool but weird to be part of something so important that I don’t even remember.”

The idea for the album cover came to the band as they were watching a TV special about giving birth under water. Drummer Dave Grohl said: “I remember sitting in our apartment with Kurt one night.

“I think Krist was there too. There was this special on TV about giving birth underwater. We went to meet the artwork people and said: ‘We saw this thing last night with all these babies underwater, and it seemed sorta cool.”

The dollar bill on a hook was added to the image later. The album art went on to stir widespread debate, with some stores even refusing to stock Nevermind.