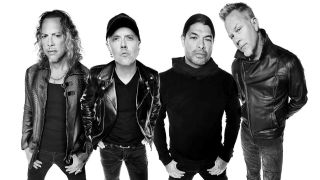 Metallica have teased a small snippet of another track from upcoming 10th album Hardwired … To Self-Destruct.

A brief sample of the track Moth Into Flame can be heard towards the end of a new album teaser video, which can be viewed below.

Lasty week, the band announced the follow-up to 2008’s Death Magnetic will launch on November 18 via Blackened Records and will cover two CDs. Metallica also issued a video for the track Hardwired and revealed the final tracklist and cover art.

Metallica said: “Hardwired… represents the next phase of our journey as Metallica and we are so excited to share it with you and we’re hoping you’ll hear a lot more of it in the coming days.

“Everyone who pre-orders the album through Metallica.com will receive an instant download of the song Hardwired.

“We cannot wait to hit the road to play these songs live and get in your faces once again, so strap yourselves in.”

The album is produced by Greg Fidelman, along with Metallica members James Hetfield and Lars Ulrich.

Hetfield said this week that the album had been in the works for eight years, but it really came together over the space of two months.

The frontman said: “Literally, the last two months is when it all started to come together. There’s no rules any more as far as you’ve got to do what the record company says or what the manager says. It’s got to be cool and fun for us – that’s the number-one priority.”