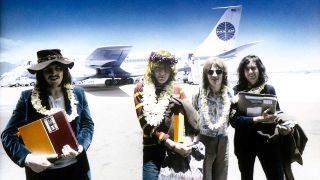 The eighth episode in Led Zeppelin’s history series has been released. It focuses on the last few months of 1969, as the band wrap up a US tour and prepare for the launch of their second album. Led Zeppelin II was released on October 22, 1969.

The first clip in the series dwelled on the recording of Zeppelin's debut album the previous year, and featured live footage of the band and facts and figures behind the album.

Part two was launched back in May and examined how The New Yardbirds became Lead Zeppelin, to eventually becoming Led Zeppelin.

The third part looked back at the band’s first-ever US tour, while part four took fans behind the scenes as Zeppelin began working on the classics Whole Lotta Love and What Is And What Should Never Be.

The fifth episide, which was backed by I Can’t Quit You Baby, reflected on the band’s North American tour as they continued the writing process behind Led Zeppelin II.

Find the new video along with the seven previous episodes below.