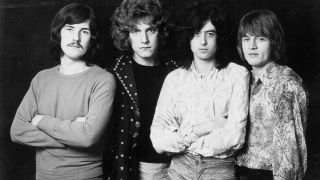 Led Zeppelin’s history is being celebrated in a new YouTube series.

Part one of a run of short stories can be watched below, with the first episode concentrating on the recording of the band’s self-titled debut album in September 1968 at London’s Olympic Studios.

The video features live footage of the band and facts and figures behind the album, which would see the light of day in 1969.

Guitarist Jimmy Page said: “The group had only been together for two and a half weeks when we recorded it.”

Bassist John Paul Jones added: “We did it in about 15 hours, with another 15 for mixing.”

The short story series has begun as part of the band’s 50th anniversary celebrations.

In February, a playlist programme allowing fans to personalise, list and share their favourite Led Zeppelin tracks was launched.

A deal between the band and Vans also resulted in the launch of a range of Led-Zep themed apparel, which features shoes, a t-shirt and baseball cap.