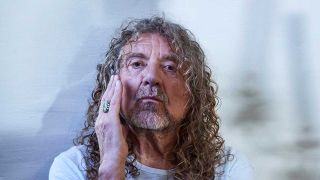 The limited edition 7’’ box set includes remastered versions of 16 singles from 30 years of Plant's solo career. The collection also features restored artwork from the original 7’’ releases, and comes packaged in a bespoke hardback book. The set is released on December 13, but is available to pre-order now.

When the podcast first launched, the former Led Zeppelin singer said, "Everybody has a back catalogue, and you do tend, as artists, to only deal in the very front end of it. But then, now and again, down the line, opening up some of the songs, and looking back at them, I marvel at some of it, and how nuts some of it is.

“For this podcast, I am going to be picking out some songs from here and there along the way mixing constant shifts in sound and intention from across this long old time."

He added: "Since 1981 I’ve enjoyed many amazing, exciting musicians. Men and women who have encouraged and enlightened, introducing me to crazy curves I could never have imagined."

Disc 1:
Side A: Burning Down One Side
Side B: Like I've Never Been Gone  (Digging Deep with Robert Plant S1, E4)

Disc 3:
Side A: Too Loud
Side B: Little By Little

Disc 4:
Side A: Ship of Fools
Side B: Tall Cool One

Disc 5:
Side A: Hurting Kind
Side B: Tie Dye on the Highway

Disc 8:
Side A: Shine It All Around
Side B: Tin Pan Valley (Digging Deep with Robert Plant S2, E1)