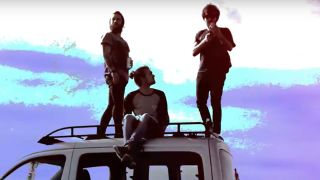 KOYO have premiered their track Tetrachromat (Parts 1 & 2) exclusively with Prog.

It features on the Leeds band’s upcoming self-titled debut album, which will launch on March 31.

The band tell Prog: “We recorded our album in the wilderness of Wales at Foel Studios and had some friends come down and film our adventures.

“While we were making music they were in and around us experimenting with time lapses and capturing our magical surroundings. The extent of footage they compiled gave us real scope to develop a concept when it came to editing.

“We wanted to mirror the energy of the song and have it represent an entire 24-hour cycle, all the time existing in this dreamlike state.

They add: “There is the physical journey capturing our constant travelling from the loudness of the city, to the quiet of the studio, and then the spiritual journey from the buzz of the morning into the deeper introspectiveness of the night.”

Explaining the track title, the band say: “A tetrachromat is an organism that possesses four independent channels for conveying colour information.”

Their material is described as “the possible missing link between 70s-eraPink Floyd and My Bloody Valentine.”

KOYO have a number of live dates scheduled across the UK over the coming months. Find a full list below.