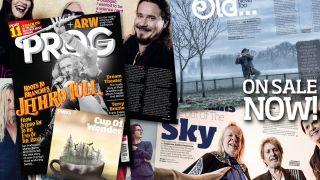 Prog magazine returns to the newsagent shelves today with issue 74, and we are so glad to be back with you. In the year they celebrate the 40th anniversary of Songs From The Wood, and with a brand new The String Quartets album, we feature Jethro Tull on the cover. In some of the most honest interviews yet, Ian Anderson and Martin Barre discuss the band’s enduring career, evolving stylistic shifts over the years and finally talk about the split that saw them no longer playing in the band after over 40 years together. And with the likes of Mick Abrahams, Tony Iommi, Dave Pegg, Jeffrey Hammond and more shedding light on their time in Tull, it’s a real must-read for fans.

Dream Theater - the US prog metallers tell the inside story of their breakthrough album Images & Words as it celebrates their 25th Anniversary.

The Mute Gods - Bassist exrtraordinaire Nick Beggs’ new outfit release their second album, and he offers his thoughts on being in Kajagoogoo!

Blackfield - while his no-man colleague Steven Wilson is back with Aviv Geffen and a fifth Blackfield album.

Nightwish - as the Finnish symphonic rock superstars take a year-long break, mainman Tuomas Holopeinen looks back at their achievements so far.

Wardruna - clad in animal pelts and playing traditional music on ancient instruments, we ask how prog are Wardruna?

Damian Wilson - reveals his prog lifestyle in Prog Me…

And Steve Hackett, Touchstone, Ghost Community, Oceans Of Slumber and more on the CD.

You can subscribe to Prog and buy individual issues here.