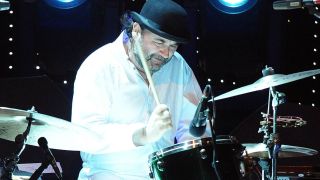 King Crimson have announced that drummer Jeremy Stacey will join them for their upcoming tour.

Regular sticksman Bill Rieflin won’t take part in the 2016 European dates, which start on September 4 at the Aylesbury Waterside Theatre.

Mainman Robert Fripp says: “Bill Rieflin recently decided to take a sabbatical, a decision supported by all the Crimson Brothers. So, what to do with September performances already sold out?

“Both Gavin Harrison and Jakko Jakszyk first thought was – call Jeremy Stacey. Jeremy grew up in the Bournemouth scene, where I went to see both Stacy Brothers at Bumbles – a Bournemouth club – in 1981.

Stacey has previously toured with artists including Aztec Camera, The Finn Brothers and The Waterboys and has recorded with Chris Squire, Steve Hackett, Ryan Adams, Joe Cocker and Eric Clapton.

King Crimson will release an an official bootleg recorded in Toronto on March 17 on 2CD. The concert is available digitally via DGM Live.