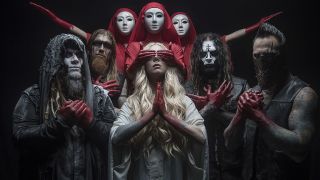 In This Moment have revealed details of their new studio album.

As previously reported, the follow-up to 2017’s Ritual is titled Mother –  and it’ll be released on March 27 through Atlantic Records.

Earlier this week, In This Moment teased a video for the lead track from the album in the shape of The In-Between – and today they’ve unveiled the full promo which can be watched below.

Mother will feature a total of 14 tracks and includes guest appearances from Lzzy Hale from Halestorm, Taylor Momsen from The Pretty Reckless and Joe Cotella from Ded.

Speaking with Rockcast 128 last year, In This Moment guitarist Chris Howorth said: "The album is done. It’s called Mother. This is our heaviest record since Blood, I’ll say that. Ritual was getting heavier than Black Widow – that was heavy in its own way.

"Now that it's all done and I'm hearing it as one thing, I'm, like, 'Damn! This is really heavy.' So I think a lot of our fans are going to really like that about it."

He added: "It's 'Mother' in the sense of mother Maria, but also Mother Earth. Mother is the key to life."

In This Moment vocalist Maria Brink will play a solo set onboard the Shiprocked festival which sets sail from New Orleans on February 1.

She’ll reconvene with her bandmates for their North American tour, which will get under way at Orlando’s House Of Blues on March 24.