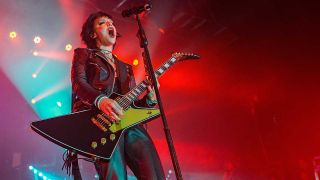 “A great guitar album makes me want to pick up my guitar, crank my amp and play," says Lzzy Hale. "Not necessarily to learn a particular song; it’s more of an unquenchable desire to hear the break-up of the amp’s speakers, feel the strings press into my fingers and make my right hand bleed from the impact of chugging.

"A great guitar album fuels me with instant inspiration, leaving me with no choice but to grab an axe and write something."

What is your criteria for a great guitar album?

“A great guitar album has to give me a certain kind of feeling. It’s more of an emotional connection to the tones and the way the riff moves your body. The guitar playing doesn’t have to be complicated – take any Neil Young record, for example. Even the simplest solos and riffs can have balls – and inspire you to write.”

Do you sit down and try to learn riffs from guitar records?

“In addition to my top five guitar albums, some other records that never fail to inspire me are Alice Cooper’s Schools Out, Metallica’s ‘Black Album,’ Holy Diver by Dio, Queens of the Stone Age’s Songs for the Deaf and Mastodon’s Once Around the Sun.

Are there any guitar-oriented albums that you didn’t “get” at first, but they grew on you and went on to become favourites?

“One guitar record I didn’t ‘get’ at first was Jeff Buckley’s Grace, but it’s only because, as a singer myself, I was overly distracted by his amazing voice. At first, I considered it more of a vocal album. But as I dug in, I realized that the man was an absolute genius on guitar.”

“This album has never left my heart. Every time I listen to it, it moves me forward. These are the riffs that get stuck in your head and change your life.”

“Tom Keifer never gets mentioned in rock guitarist countdowns. I think he’s very underrated. There’s an art to writing a riff that complements a vocal melody. Tom is also an amazing slide player – he has that ‘heartbreak tone’ that literally stings your soul.”

Neil Young with Crazy Horse – Everybody Knows This is Nowhere (1969)

“You may not see this one on many guitar album lists either, but Neil Young is a huge influence in how I perform as a guitarist. There’s a real ‘I don’t give a fuck’ attitude in his approach to the guitar, along with a rawness that puts this picture in my mind of Neil just walking into a smoky bar at three A.M., plugging into whatever rig and just bringing the house down.”

“Another hugely underrated guitar album. Those riffs are present and ballsy, and they match Chris Cornell’s fervour on vocals. The Outshined riff is one of my all-time favourites.”

“One of the band’s earlier records, Sin After Sin really displays the raw power of the famous Glenn Tipton-K.K. Downing guitar team. Dissident Aggressor is punishing, and Diamonds & Rust is timeless.”