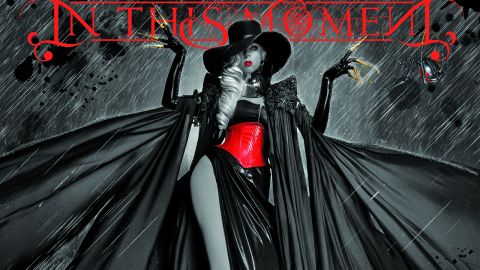 In This Moment have been a fairly frustrating band in their near-10-year career.

For a group that are so visually and aesthetically striking, their music seems to often take a back seat and they would appear to favour stage props and conceptual ideas over songwriting and riffs. Black Widow, though, is a definite step in the right direction. For once, songs like the grinding Big Bad Wolf and the whisper-to-wail of first single Sick Like Me sound like they’ve been written to support and broaden their musical horizons, as opposed to chucked together as something to go alongside a cool video. It’s slicker and poppier than before – no doubt this is the band’s most commercial record yet – but it suits them. There’s nothing here that will reinvent the wheel for rock music; what there is instead is a bunch of highly polished and beautifully produced, commercially savvy anthems for people who like their music to be as big, bold and brash as the image that In This Moment project. Purists may hate it, but finally the band sound as colourful as you hoped they would when you first saw their pictures.