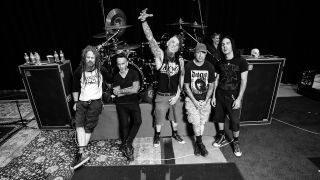 Hellyeah will release their new studio album later this year.

The news comes after the band’s weekend show in Las Vegas which was held in honour of Vinnie, who died in June last year at the age of 54.

Hellyeah brought in Stone Sour’s Roy Mayorga for the performance, which also saw May 11 officially declared Vinnie Paul Day by the Clark County Board Of Commissioners.

A portion of the proceeds from the sold-out show, were donated to The American Heart Association.

And along with the album announcement, Hellyeah have also confirmed they’ll head out on the road across the US throughout the summer in support of Welcome Home.

Bassist Kyle Sanders says: “While Vinnie Paul is obviously irreplaceable, one thing we can’t not do is tour. As easy as it would be to say we’re not going on the road, we have to.

“Vinnie would be extremely disappointed in us if we didn’t promote this record properly. He’d be pissed off at all of us for putting all this work into finishing the record and then just letting it sit there on the shelf while we put a couple of songs to radio and whatever… and we know that.”

The album is now available to pre-order.