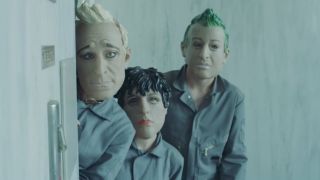 Green Day have released a video for their track Bang Bang.

The song features on the trio’s upcoming 12th album Revolution Radio, which launches on October 7 via Reprise Records.

Billie Joe Armstrong, Mike Dirnt and Tre Cool previously issued a stream of Bang Bang, along with a video for Revolution Radio.

Green Day’s Armstong also admitted that writing Bang Bang freaked him out as he penned the track from the perspective of a gunman.

He said: “Bang Bang is about the culture of mass shooting that happens in America mixed with narcissistic social media. There’s this sort of rage happening, but it’s also now being filmed and we all have ourselves under surveillance. To me, that is so twisted.

“To get into the brain of someone like that was freaky. It freaked me out. After I wrote it, all I wanted to do was get that out of my brain because it just freaked me out.

“I wouldn’t even say I was trying to understand it. I was just trying to figure out the character. I don’t know why someone would ever do something that horrific because I know I never would.”

Green Day will head out on tour later this month in support of Revolution Radio, with dates planned across north America and Europe.