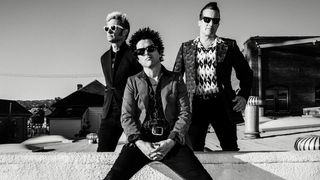 Green Day have released a stream of their new single Bang Bang.

It’s the punk trio’s first new music since last year’s Christmas track Xmas Time Of The Year and it’ll appear on their 12th album titled Revolution Radio, which is planned for an October 7 release.

Green Day have opened pre-orders for the follow-up to 2012’s series of albums ¡Uno!, ¡Dos! and ¡Tre! on CD and limited edition red vinyl, and made the full tracklist available. See it below.

Green Day have also made Bang Bang an instant download for those who buy the record ahead of its launch.

They were the subject of 2015 movie Heart Like A Hand Grenade, which focused on the on the making-of the band’s smash hit 2004 album American Idiot. The American Idiot stage show also made its debut in the UK this year.

Green Day were inducted into the Rock And Roll Hall Of Fame last year.