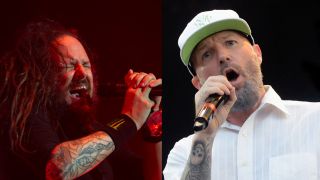 The co-headlining tour sees the bands play six arena dates in December. Korn hit the road in support of upcoming 12th album The Serenity Of Suffering, set for release on October 21 via Roadrunner Records.

They’ll play in Manchester, Glasgow, Birmingham, London, Cardiff and Nottingham on the tour.

Tickets go on sale at 9am on September 16 (Friday) via TeamRock Tickets and other good ticket sites.

Korn appear in the 30th anniversary collectors’ edition of Metal Hammer magazine, which is available now in print and via TeamRock+.

Discussing how different he is as a person today compared with when Korn launched their career in 1994, frontman Jonathan Davis tells Metal Hammer: “It’s night and day.

“We’ve been together for 22 years and somehow it’s made me better. Some people paint, they write poetry or they go and beat the shit out of a punchbag. I do it with a pen and a microphone.

“If you listen to your soul, then we have dark and difficult things inside all of us, and I get mine out to help myself and hopefully help other people.”

The 30th anniversary edition of Metal Hammer comes with a free CD called Decades Of Destruction. It features a string of top metal acts covering tracks by other bands, including Korn taking on Faith No More’s hit We Care A Lot. Limp Bizkit’s Break Stuff is covered by Hacktivist.

The progress on long-awaited seventh Limp Bizkit album Stampede Of The Disco Elephants remains a mystery.