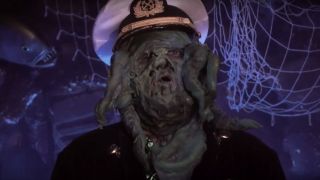 Gone Is Gone have released a creepy video for their song Echolocation.

Sanders says of the bizarre promo: “The video is inspired by Gibsonton, Florida – the famous wintering and retirement home of traveling sideshow carnies.

“That’s the backdrop for this cautionary tale about two punks out on an adventure ride. Through a series of events, the mischievous energy they exert returns full circle, eventually leading to their own demise.”

The video was written, produced, directed and edited by Newmerica Media – and the company’s director Bryan Bankovich gives more information on the shoot.

He says: “Troy came up with the initial concept – then we met with him for deviled eggs and whiskey to refine his vision. We had so many talented people working together to make this epic concept come to life.

“Production designer and art director Shane Morton and his team were instrumental in making this video a reality. He was in charge of all the ridiculous props, SFX and creatures you see on screen.

“And fun fact – Troy’s two kids and wife are characters in the video, playing the wolf boy, orphan girl, and soothsayer, respectively.”