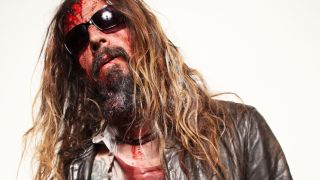 Rob Zombie has confirmed that work on his next album has begun.

And he’s updated fans with a couple of Instagram posts. The first shows his dog with the caption: “Day one of working on the new album. Godzilla is already bored.”

He later uploaded a picture of a bat, saying: “This must be a good omen. A bat has landed on the front steps of the studio for a minute then flew off.”

Speaking with Kerrang! Radio earlier this year (via The PRP), Zombie said: “These days, as everybody knows, there’s not really a proper album cycle where you make an album and just tour it to death, because no one really gives a shit if anyone’s making records that much anymore.

“I like making music. I’m different than a lot of people I hear talking. I don’t care if people are buying it. I’m sick of hearing about the old days. Who gives a shit?”

He added: “I don’t care if they steal it, whatever they can – I prefer they sneak into the store and steal the vinyl. But if they choose to steal the download that’s OK too. But I challenge you, start stealing the vinyl if you’re gonna steal our music.”

Further album updates will be revealed in due course.

The A-Z Guide To Rob Zombie