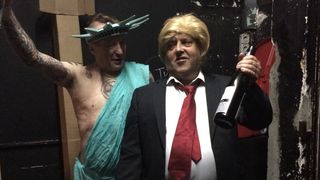 Peter & The Test Tube Babies singer Peter Bywaters was refused entry to the US late last week for dressing up as president Donald Trump during a tour of Germany in 2016.

He had planned to hook up with his bandmates at the Punk Invasion Festival in Santa Ana, Orange County, California on Saturday. But after landing in San Francisco, Bywaters was taken aside and interrogated for six hours by customs and border protection officers.

They confronted him with photos and videos of himself dressed as Trump from the band’s German Jinx ‘Presidential’ Tour last year – where the singer also spoke out against the president.

Following the ordeal, Bywaters had his phone and passport confiscated, was finger printed, DNA swabbed, photographed and forced to make a sworn statement before being escorted to his seat on the plane.

He was denied alcohol on the 11-hour flight back to London after being told that it was United Airlines policy to refuse alcohol to deportees. Once he landed back in the UK, his phone and passport were returned.

Bywaters exclusively tells TeamRock: “I had only been there 30 seconds when the customs and border control guard swung his screen round and said: ‘Is this you?’

“There in full view was a video from last year’s German tour with me dressed as Donald Trump smoking a fake joint.

“From there it all went down hill. Six hours later I was forcibly escorted to my seat on the plane.”

“A US tour or festival will never ever happen again!”

The band’s set at the festival went ahead with the help of guest vocalists. Watch a clip of Bywaters dressed as Trump in the video below.

Peter & The Test Tube Babies will release their new album That Shallot on September 15 which will be preceded by the single Crap Californian Punk Band featuring Lars Frederiksen on September 1.

Donald Trump's tweets have been turned into an emo song