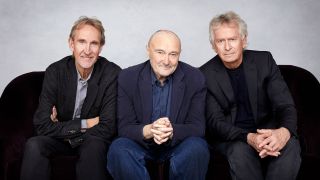 Genesis have confirmed that their UK and Ireland tour, which was due to take place throughout November and December, has been pushed back to 2021.

Phil Collins, Tony Banks and Mike Rutherford had been due to kick off The Last Domino? tour in Dublin on November 16 and wrap up with two nights in Glasgow on December 11 and 12. But due to restrictions on mass gatherings still in place, the trio have moved all the shows into April next year.

All tickets previously purchased for the 2020 dates will remain valid for the new shows.

Rescheduling the tour has also opened up the opportunity for extra concerts, with Genesis adding two brand new dates at Birmingham’s Utilita Arena on April 7 and The O2 in London on April 30.

Tickets for these two shows are now on sale.

Find a full list of the new dates below.

Collins, Banks and Rutherford will be joined onstage by Nic Collins on drums, and the band’s long-time guitar and bass player Daryl Stuermer.

The Last Domino? tour will be the first gigs Genesis have played since 2007, with Phil Collins previously telling Prog: “There were more reasons to do it than not to do it. If we had to do it the way we used to tour, I don't think I'd be doing it. But nowadays it can be done differently, and I've been doing that for the last couple of years.

Banks added: “After Phil finished his own tour, everybody thought, ‘We could talk about it and see whether it’s a good idea.’

“Once we decided it was a possibility, we wanted to see how it would work out when we played together. So we spent a couple of weeks in January in New York seeing how it sounded. People asked, ‘Why are you here?’ We just said, ‘Oh, for a wedding.’”