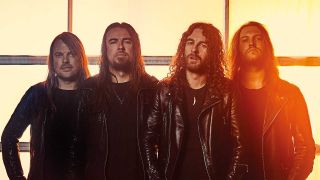 Metal Hammer has teamed up with Airbourne for this world exclusive 'Boneshaker' bundle!

The bundle includes a hand-signed and numbered lyric sheet, Boneshaker patch and exclusive Airbourne magazine cover. Only 300 are available worldwide, so get yours now!

Great news for Airbourne fans – this is an exclusive online deal and features Airbourne replacing Within Temptation's Sharon den Adel and Evanescence's Amy Lee on the cover of the current issue of Metal Hammer. But fear not, it still includes our world-first interview about uniting the two front women ahead of their upcoming joint tour.

Also included in the issue: Editor Merlin jets off to the US to delve inside Metallica's S&M2 anniversary shows and Iron Maiden's US Legacy Of The Beast tour, we catch up with Alcest to discover how vocalist Neige has been having strange visions of heaven since he was a child and we have the skinny on what went down when we took Lacuna Coil to the London Dungeon for an exclusive playback of their new album, Black Anima.

So don't miss out – grab yours now!

Airbourne's new album Boneshaker is out this Friday via Spinefarm. They tour the UK next month.