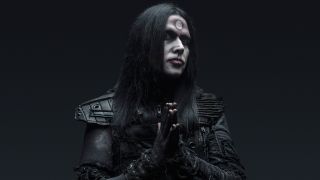 Horror aficionado, Murderdoll and conspiracy theorist, Wednesday 13 has many strings to his evil bow. With a decade spanning over two decades in various bands, he has a legion of dedicated followers across the world who worship at the Chapel Of Blood. But what goes on inside the mind of the man who loves nothing more than to scare the bejesus out of norms?

“I first discovered rock music in the soundtracks of movies, but it really kicked in when I discovered Alice Cooper. I had these Alice Cooper cassettes, my parents said he was a devil worshipper and bit the heads off chickens, so at the weekend I hid in my bedroom when my parents had gone to bed, turned off the lights and listened to Alice. It was so terrifying because it was new, it sounded creepy and my parents hated it. Then I was pretty much hooked.

“When I was in sixth grade I was trying to get this girl’s attention, so I lip-synced a Whitesnake song at a talent show. When I went out I was so nervous. Me and my friends were playing cardboard cut-out shapes of guitars, we drew strings on them with a Sharpie. At the end of the song, everyone stood up and cheered and I thought ‘Whoa, if I could do this for the rest of my life it would be awesome’.”

“I’m not a religious person at all. I grew up in the Bible Belt of North Carolina, my parents weren’t very strict religiously, they still believed in god but because they worked so much they didn’t have time to go to church all the time. I never had any crazy religious background apart from growing up the South where there’s a church on every street corner, and looking the way I did growing up, everyone looked at me as the devil boy with long black hair.

“I wasn’t trying to look evil growing up, either. I had long blond hair, and I went straight to dying it black one day, and everybody at my school who used to call me names because of my blond hair started calling me devil boy. I was really shy and thought if I had black hair everyone will think I’m evil and they won’t fuck with me. That’s what happened in my last two years of high school, nobody messed with me because I was evil.

“My whole last album [Condolences] was based around death, and the very last song is talking about what happens after you die. I read a lot of different things, I don’t think it’s the end like most people think, I think it could be the beginning. Most people think when you die then that’s the end of it, but I think it’s just the beginning of the journey. It’s kinda scary not knowing where you’re gonna go. I don’t think there’s a heaven or hell kind of thing, I think it’s another plain of existence that you go to.

“I’m terrified of death. I’ve had a couple of near-death experiences over the years and it’s on my mind constantly. Seeing friends, celebrities, and musicians dropping like flies over the past year, it definitely puts that thought into my head.”

“I don’t know what first drew me to horror. I was watching The Munsters and The Addams Family first, and I was playing with Dracula and Wolfman figures with my GI Joe, so I always had it. But I think it was the same thing with music. My parents didn’t want me to watch horror movies and when they said don’t do it, I would stay up late and watch these movies. It was a whole other world to me. I remember seeing Nightmare On Elm Street for the first time and could not sleep. I saw it when it first came out, before Freddy Krueger was a household name, he was terrifying. For some reason it was fun to be scared.”

“Years ago, I was in Newcastle, England, on a ghost hunt for a weekend. I was being a jerk about it and not paying attention, probably ruining it. The next day, I decided to behave, and we went into this old castle and it was a whole hour/two hour experience. I was in the bottom of this castle in the dungeon where people had been killed. We had a glass on the table and it went around with our fingers, we let go of the glass and it spun off the table and smashed. I got the fuck out of there!

“I live in Los Angeles and where I live, everybody is just like ‘What the fuck?’ I’m from North Carolina and when I go home to see my family and friends there, and it’s just like a WWE wrestling event there. I feel like everybody who likes professional wrestling thinks Donald Trump is the man, and there are a lot of professional wrestling fans. They like him because he acts like one of the bad wrestler guys and they don’t look at what this buffoon has said over and over again. He has an agenda – and his agenda is him. He’s not looking out for the people. I’m not saying the other candidates are any better, but for me the choice we have for president at the moment is like deciding what pile of shit to step in. There is no better choice, they’re both piles of shit.”

“I put my fans on a pedestal for everything I do. Whenever I make a setlist I always put myself in the audience, I always think about what fans would want to see at shows. After years of performing, it’s not just you any more. You have to think about that and if you don’t, I don’t know what you’re doing. Without my fans, I don’t know what I’d do. I’m not in the biggest band in the world but my fans make me feel like that.

“There are some fans that want me to be Murderdolls 2002 era Wednesday 13, and they just can’t understand what I do now. Some fans have grown with me and the band, through every style we’ve done. There are fans who just want to hear the greatest hits, but if you do come to my show you’re not going to be disappointed. You’re always gonna get a handful of what you came there for.”

Wednesday 13’s Condolences is out now via Nuclear Blast. His new album is due in Summer 2019