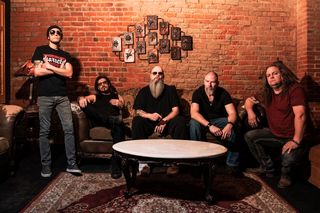 New Orleans, that great ol' town situated along the banks of the Mississippi river is known universally for its incredible music scene. From jazz and blues, R&B and rock'n'roll to hiphop and of course, heavy metal – the eclectic and colourful culture of NOLA has influenced musicians within every genre.

Those muddy Mississippi river banks proved to be the perfect terrain to cultivate a lively New Orleans heavy metal scene back in the early '90s, a scene that spawned bands such as Corrosion of Conformity, Crowbar, Superjoint Ritual, Down, Acid Bath and many many more.

But one band in particular is credited with pioneering that groove-orientated thrash metal that came to be known as the "Louisiana sound" for which the likes of Pantera, White Zombie, Lamb of God and Machine Head would become know. That band was Exhorder.

"Adam is one of THE premier singers in the world, and his song writing has really strengthened in recent years. Great bluesy rock with a heavy edge, with peaks and valleys strewn about these sessions. Here’s Warbird from the self-produced release!"

"This band has been around for a good long while, and the line-ups have evolved some. Great energy, and a nice combination of punk and metal. Check out Cannibal, Me? from the Crescent City Carnage compilation!"

"Formerly known as Six Pack, Morbid Torment carries the torch and waves the flag for thrash/death metal into the future. With the speed of Dark Angel and the grit of Possessed, these guys will drag your soul all over the stage when they play! Lucifer is a track that has it all in one package."

"Surf punk favourites from New Orleans, The Unnaturals are one of the most fun live bands! Blending traditional surf music with hints of punk and metal, this band is very unique and loved in my hometown. They even do a medley of Iron Maiden in their set! Here is a live performance from a few years back of Whiskey Surf."

"One of the most fun bands in NOLA; punk meets hard rock and comes with a keg party when DEATH ED. arrives! Bird Enthusiasts is a high energy song that packs a good time in the lunchbox."

"If heavy, pounding tunes blended with melodic breakdowns is your thing, Cain is your band. Soaring vocals grace these songs and get down and gritty in all the right spots. Here we have “Hex”, a song from their latest album."

"Technically not a NOLA band, but they’re just an hour or less west of us, and they play NOLA as much as anyone. This is a great live band, and they’ve been slugging it out, in and outside of Louisiana for a long time. This song Dragnut will make you want to either work out or guzzle beer!"

"Heavy, stoner type jams with good vocals. These cats know good music and a good time as well! Give Tale of the Wandering Witch a spin."

"Absolutely brutal death in your face, delivered in stereo! These guys do not let up. If you like it chunky with growling demons, Penthouse of a Thousand Corpses is perfect for you."

"These guys are the next generation of rock in NOLA. In the tradition of 70s/80s hard rock, they keep coming with nasty, gutter spiced rock delivered full force. Unleaded can be heard here below."