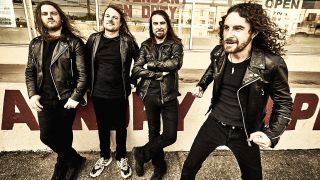 Airbourne are back with a new single and revealed details of their new studio album.

The album is titled Boneshaker and will be released on October 25 through Spinefarm Records – and to mark the news, the Australian outfit have launched the title track which can be listened to below.

He says: “It’s a live gig in the studio. This is always something we wanted to do – find a way to bring the soul and power of an Airbourne live show into an album. Cobb caught our lightning and put it in a bottle.”

A statement on the album release adds: “There are no weird tangents here, no uncalled for asides, no messin’ about. This is straight-down-the-line pure rock‘n’roll drama smelling of burnt rubber, spilt gasoline and valves glowing red hot.

“No ballads, no acoustic guitars, no keyboards. Ten tracks, 30 minutes of music. Everything lean and lethal, stripped to the bone, to those essential elements that rock‘n’roll requires to properly do its work: Raging guitars, pounding bass, vocals packed full of real personality – the kind of passion that only comes from wilfully pursuing a life on the line.”

As for the cover design, which was created by Matt Read of Combustion Ltd and Sean Tidy of Design House Studio Ltd, guitarist Matthew Harrison says: “The whole sentiment we were after was about rock’n’roll for life.

“We wanted to create something tattoo worthy and that the artwork was classic and stood the test of time.”

Airbourne will head out on tour across the UK later this year with Tyler Bryant And The Shakedown.