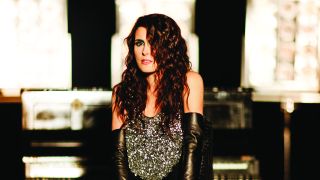 Within Temptation are one of the biggest symphonic metal bands on the planet, amassing six full-length albums and a few festival headline shows over their almost-20-year career. Leading the Dutch seven-piece throughout has been the all-powerful Sharon Den Adel… but what music does she listen to when not making rooms shake with her voice?

The first record I bought was…

“I was brought up with a great musical diversity – my family loved everything from Deep Purple and ELO to Queen and Kate Bush. I was four years old when my brother and I went to buy this because I loved Nights In White Satin. We were living in Indonesia and the record store didn’t sell original records so we had to buy copies!”

My favourite album artwork is…

“It scared the shit out of me when I first heard it – I didn’t know what I was buying! I was four years old and my English wasn’t good at the time, so I was more interested in the cover. The darkness of the music really intrigued me.”

The album I wish I’d made is…

“I love lyrics and hers are amazing. It really touches you, it’s so visual and intense. With metaphors like ‘I got the anti-Christ in the kitchen yelling at me again’, you can really see this woman going mad about nothing!

The album I break the speed limit to is…

“Some of these songs were recorded at a concert I wasn’t allowed to go to – it was too far away in the big, bad city of Amsterdam. It’s forbidden in my car or I’ll get a speeding ticket. I’ve already got one… they’ll take my licence away next!”

No one will believe I own a copy of…

Grease – Grease: The Original Soundtrack from the Motion Picture (Polydor, 1978)

“I played this record daily from the age of four to 13. You’re The One That I Want is my favourite! It’s one of my guilty pleasures… actually, I don’t feel guilty about it at all!”

A kid asks me what metal is, I hand them a copy of…

“Young and old will love this album; it has epic guitars and a great album cover! Iron Maiden make music for all times and all ages. When we were playing with them, we saw three different generations of families all going crazy to the same band. It’s amazing! You can always go heavier, but this is a good place to start.”

The album I want to be remembered for is…

“Hydra is still my favourite album. It was a natural development into what we wanted to sound like [in 2014]. I’m really into uptempo songs, so it summed up all the kinds of music I like, with inspirations from both the alternative side and the metal side.”

The album I want to try again is…

“It’s full of loops – nobody uses those nowadays because they sound so synthetic, but it’s typical of the trends of that time. I love the songs because they throw me back to having to record on tapes, but there are more modern sounds to use now.”

The most underrated album is…

“They laid down the genre for bands like us. Every feature of the genre now is in that album. They even used opera singers and nobody ever did that back then! The combination of sounds on that record was an inspiration to everyone like us and they never got the credit for it.”

The album I want played at my funeral is…

“It should be a happy album because I think you should celebrate life! Bob Marley is critical in his lyrics at times, but also very positive. Although I like heavy music, a funeral’s heavy enough. We need contrast, so let’s do something more uplifting! Let’s get together and feel alright!”

Within Temptation’s Sharon den Adel: Why I Love Kate Bush