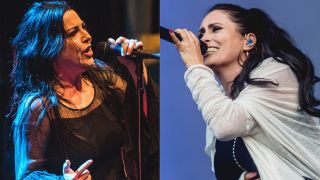 Evanescence and Within Temptation have announced a European co-headline tour under the Worlds Collide banner.

The bands will join forces in April next year for a run of 12 shows, kicking off at the Brussels Palais on April 4 and wrapping up at Amsterdam’s Ziggodome on the 21st of the month.

Evanescence’s Amy Lee says: “We are very excited to join forces with Within Temptation for what I know will be an epic tour in April.

“We’ve had people ask us about doing something together for a long time, and we’re going to make it worth the wait! Looking forward to hearing Sharon den Adel’s gorgeous voice every night!”

Within Temptation’s den Adel adds: “This is going to be a tour you don’t want to miss! It was really great meeting Amy and the rest of the band recently. I think we have a lot in common but most of all I’m sure that we share the same passion and fire for what we love doing most.

“I’m really looking forward to touring Europe together and to make it memorable.”

Tickets will go on general sale this coming Friday (September 20).