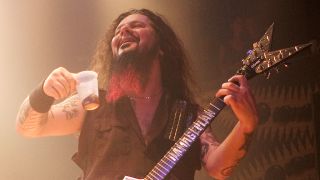 The clip was shot in October 2004, just weeks before Dimebag was shot dead on stage on December 8.

It was uploaded by photographer Chad Lee, who worked with the band.

In a feature marking the anniversary of Dimebag’s death yesterday, his brother Vinnie Paul tells Metal Hammer: “I always thought he was super-special and I was so proud of every time we ever played anywhere.

”There were just to many great players who admired what he did. It was really special to play with him and it’s something that I’ll never feel again.

“But it was the most beautiful thing in the world. He really was special and one of a kind.

“He loved to entertain people and loved to put a smile on people’s faces, and he didn’t care how he did it – with his guitar, doing a picture backstage with fans, signing autographs, or just hanging out being the life and soul of the party.”

Paul included an archive Dimebag guitar track on Hellyeah’s latest album Undeniable. He can be heard on their cover of Phil Collins’ I Don’t Care Anymore, a song the brothers used to play together.