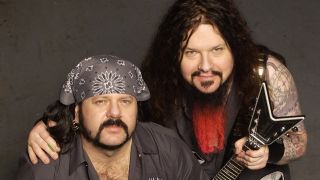 Paul and Abbott in their Damageplan days (Image credit: Getty)

Former Pantera drummer Vinnie Paul has revealed that his late brother DImebag Darrell Abbott used to write all his guitar riffs while using the bathroom.

He only found out when he visited his bandmate’s home and found recording gear in the smallest room.

Paul tells Loudwire: “He’s got so much stuff, man. One of the things people don’t know about Dime, he had a guitar in his bathroom.

“I went in his bathroom one time and I was like, ‘He’s got a guitar, he’s got his little tape recorder – what’s that doing in here?’

“I said, ‘Dime, what’s the deal with guitar in the bathroom?’ He goes, ‘Man, that’s where I write all my riffs. That’s why my riffs are the shit!’”

Paul and his band Hellyeah recently released a cover of Phil Collins track I Don’t Care Anymore, featuring an unheard guitar track laid down by Dimebag before he was shot dead on stage with Damageplan in 2004.

The drummer has previously discussed the possibility of releasing more of his brother’s unreleased material. Now he says: “He would have a bad experience at Taco Bell and write a song about it. All this stuff is recorded and in the vault, and at some point people would really enjoy hearing it.

“It’s fun stuff, just him singing about life, things he went through. Nobody really knows him as a singer, but he was a pretty good singer too. I’d like to put that stuff out at some point.

Hellyeah are currently touring North America, with European and UK dates to follow next year – full dates below.