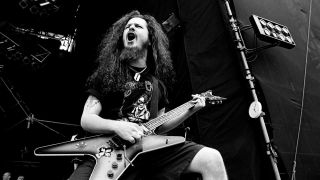 Ultimately Pantera ended under the most horrible of circumstances, yet in happier times they were pure metal magic. Dimebag Darrell and Vinnie Paul Abbott may be gone, but their legacy remains. We track the highs and the lows of this most brutal of bands – from their much-ignored glam period through to the hard-hitting riffage we know and love.

Woah, hold on there! Yes, this is the same Pantera we’re talking about – the ones who released Vulgar Display Of Power – though the chances are that most Hammer fans won’t be too aware of Pantera’s debut album, nor the following three or four Pantera releases. Metal Magic – housed in what must rate as one of the most cliched of metal album covers (painted by a friend of the band) – is pure glam metal, slightly rockier than that which stalked Sunset Boulevard, but not by much. The likes of Ride My Rocket (yes, really), Nothin’ On (But The Radio) and Rock Out will leave most Pantera fans open-mouthed in horror and confusion. Of course, in 1983 the band were still teenagers, and fronted by Terry Glaze, a rock singer in a far slicker vein than Phil Anselmo, all too young to know any better. More laughter inducing than vomit producing, it must be said.

While any of Pantera’s first three releases are mirth-inducing at best, much of that is to do with the band that they would become. For an album released on the group’s own label back in 1984, Projects In The Jungle might not sound too bad. Placed alongside Vulgar Display Of Power it’s like comparing Cannon & Ball with Monty Python. Heavier than the band’s debut, true, it still boasts a dire song called Heavy Metal Rules and much less besides. Still, actual tunes such as Out For Blood, Like Fire and Takin’ My Life do show a band maturing (slightly) into a more solid metal outfit. The album is also the favourite of original singer Terry Glaze, who says of Projects In The Jungle, “I just dig the tunes, especially All Over Tonight.” Yet placed alongside any Pantera album featuring Phil Anselmo, Projects In The Jungle simply sounds like the very different band they then were.

“We were into Iron Maiden,” is simply how original Pantera singer Terry Glaze refers to the inspiration behind Pantera’s early music. That’s as maybe, but given the way this band helped shape the metal landscape in the wake of albums like Cowboys From Hell and Vulgar Display Of Power, any Pantera fan thinking about trying to seek out any of the band’s first three albums should be warned. This is traditional heavy metal with a slight glam bent. Songs like Hot And Heavy, Onward We Rock and, ahem, Valhalla are a far cry from Cemetery Gates, Mouth For War or The Art Of Shredding. Pantera released and sold their early albums themselves – with sales eventually reaching the 1000 mark – but times were changing. Major labels would eventually show an interest, Glaze would be off to the likes of Lord Tracy and Crayfish, and there’d be a new singer in town.

Although he claims today to have no recollection of a deal being on the table via Kiss bassist Gene Simmons, perceived wisdom is that singer Terry Glaze was involved in talks which ultimately led to his departure. Whatever, by the time of Power Metal, Glaze was gone and New Orleans native Phil Anselmo, complete with big hair, was the man with the mic. Of all of Pantera’s early works, Power Metal is the one that highlights the way forward to the band they would become. Dimebag’s (at this point still known as Diamond Darrell) riffing is more frenetic, and despite Anselmo’s high-end vocal performance and song titles like Rock The World, this is early Pantera at their heaviest. There are even slight traces of Anselmo’s fondness for the likes of Exhorder that would change the band beyond recognition in the space of two years.

After three such groundbreaking and essential albums as Cowboys…, Vulgar… and Far Beyond… Pantera were faced with something of a quandary. Should they stick to their guns and deliver another high-octane set of brutal, headcrushing metal, or try to do something slightly different? Brothers Dimebag and Vinnie Paul were both keen on the latter, singer Anselmo favoured the former. Bassist Rex, never the most voluble member, probably kept his opinions to himself. The resulting album proved the brothers had won out, and The Great Southern Trendkill is easily the most diverse of the modern-day Pantera albums, even dipping into balladry on the likes of 10’s and Suicide Note Pt. 1. Lyrically, Anselmo’s normal poetic angst was replaced by drug-related diatribes and rants at the media, showing something, somewhere, was very wrong indeed.

Almost as if the varied tempos and vocal effects of 1996’s The Great Southern Trendkill had taken Pantera to areas not everyone in the band was comfortable with, the group’s final studio release tries very hard to keep things close to old-school ways. Given this, there is little doubt that Reinventing The Steel is up there with Vulgar Display Of Power as one of Pantera’s heaviest releases. Yet Reinventing… lacks the freshness of Pantera’s early 90s albums. Perhaps that’s because of the in-fighting in the band – Dimebag and Vinnie favoured experimentation, while the drink- and drug-addled Anselmo preferred the doom-laden brutal metal approach. Whatever, it didn’t really matter. The resultant live shows were so fraught – the band were falling apart at the seams all over Europe – that the end was obviously nigh.

It was Pantera’s third album in four years, it entered the Billboard chart at number one, and rocketed the band’s seemingly never-ending touring schedule into the arenas. With Far Beyond Driven, Pantera had truly arrived. But yet it’s not Hammer’s essential recommendation. Why? Simply, the songs aren’t as good as those featured on Vulgar Display Of Power, and in the likes of Good Friends And A Bottle Of Pills and their inclusion of a cover of Black Sabbath’s Planet Caravan there are even hints Pantera might be running out of ideas. Not so, however, on the likes of Strength Beyond Strength, the Grammy-nominated I’m Broken and the quite malevolent Slaughtered, which prove that Pantera were still adept at creating near-lethal metal. Commercially they’d never be as big again, but the cracks would soon show.

Breakthrough album or ‘real’ debut release, it depends on your point of view. Either way, there’s absolutely no doubt about the impact Cowboys From Hell had on Pantera and on heavy metal itself. In place of the traditional approach of Power Metal is an unbridled attack on the senses. Diamond Darrell (as he was still known) proves to be a hitherto unknown virtuoso, calling up the kind of blinding riffage and frenetic soloing he had never hinted at before. Elsewhere, Phil Anselmo, whose fondness for New Orleans’ thrash metal band Exhorder was a clear influence, adopts an even greater range than he had on his Power Metal debut. The highlight is without a doubt the seven-minute-plus Cemetery Gates, but it’s pushed all the way by the title track and Primal Concrete Sledge. A new dawn for extreme, and extremely good, heavy metal.

If Cowboys From Hell surprised anyone who had been aware of the hair metal line-up of Pantera, then the following Vulgar Display Of Power certainly laid to rest their 1980s ghosts. Diamond Darrell (it would be his last appearance as Diamond, opting for the decidedly less glam ‘Dimebag’ after this album) churns out an even heavier selection of downtuned riffs, while Phil Anselmo drops the more histrionic vocals in favour of an overall hardcore style. This proved to be a winning formula for the band.

Opening with the abrasively impressive Mouth For War, and delivering a second knock-out punch with Walk (the first metal single to debut at number one on the US charts), this is Pantera’s songwriting at its most impressive. There’s little to say about Fucking Hostile not relayed by the song’s title, and even when they drop the tempo, on the likes of Hollow and This Love, there’s an almost insidious heaviness to the band’s overall sound. Vulgar Display Of Power is very much, from start to finish, an unrelentingly heavy album.

This is, perhaps, why things took a while to take off for the band. Cowboys From Hell was closer in spirit to the thrash-metal sound which had slowly moved to the fore in metal. Yet in the early 90s, the big thrash pioneers like Metallica, Megadeth and even Slayer had become more mainstream in sound. For fans of heavier matter, the arrival of Pantera’s new, more brutal metallic approach couldn’t have come at a more apt time. Bearing this in mind, it was MTV’s acceptance of their videos that went a long way to breaking the band. This, you could say, is ironic.