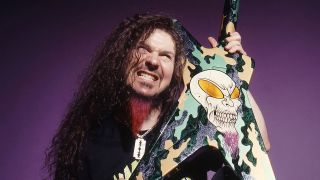 On December 8, 2004, heavy metal supergroup Damageplan took to the stage at the Alrosa Villa nightclub in Columbus Ohio. Before the band could finish their first song, deranged fan Nathan Gale rushed onto the stage with a Beretta semi-automatic pistol, fatally shooting guitarist Darrell 'Dimebag' Abbott in the head. He was just 38 years old.

Damageplan's head of security Jeffrey Thompson tackled Gale and was killed in the ensuing struggle. Fan, Nathan Bray, also tragically lost his life while attempting to aid the fallen men and Erin Halk, an employee of the venue who tried to prevent Gale from reloading, was killed by the rogue gunman.

While Nathan Gale was eventually apprehended by Columbus police officer, James Miggemeyer, who entered the club and shot Gale once in the head – killing him instantly – the night sent a wave of horror, disbelief and grief throughout the metal community.

The tributes flooded in from every corner of rock'n'roll, with thousands of fans and fellow musicians – including Eddie Van Halen, Zakk Wylde, Corey Taylor, Jerry Cantrell and Dino Cazares – turning up for his public memorial. Dimebag was buried in a Kiss Kasket and laid beside his mother at the Moore Memorial Gardens in Arlington, Texas.

15 years later, Dimebag was inducted into the Hollywood RockWalk with Kiss guitarist and Dime's no 1 idol, Ace Frehley speaking in honor of the late guitarist.

Speaking to Hammer back in 2012, Ace said: "Well, Dimebag was the first to play everything together: he was bluesy, melodic and fast. He was an amazing shredder and he had this unique approach that was instantly identifiable.

"I had the luxury of spending a week on his ranch in Texas and we got really crazy. I crashed the truck or something, his living room was insane, the ceilings were wrapped in barbed wire – he was crazy!

"Later him and Vinnie took me to their strip club, we pretty much stayed there for three days, and on the last night we brought some strippers over. It got pretty damn crazy. Dimebag was such a fun guy to drink with. And at the time we were pounding it down, I’ll remember that weekend for my whole life.”

So on this December 8, party just like Dimebag would have partied, and blast these 10 incredible tunes on your stereo – chosen by his own brother and bandmate, the late Vinnie Paul.

“He could play it note for note, just really loved that track as a kid.”

Diary Of A Madman by Ozzy Osbourne

“Randy Rhoads would always have to come first for him. Especially the intro on this.”

“Dime loved the emotion in that track! Anything off Gretchen Goes To Nebraska. Dime fuckin’ loved King’s X.”

Boom Boom Out Go The Lights by Pat Travers Band

“The band with Pat Thrall on guitar. He would wear out that live album.”

Number Of The Beast by Iron Maiden

“Dime was just a huge fan of Dave Murray and Adrian Smith, how they played together.”

“Anything with Billy Gibbons playing guitar worked for Dime.”

Highway To Hell by AC/DC

“Might be a little bit surprising but Dime loved Angus Young, man. Talk about groove rock.”

Master Of Puppets by Metallica

“As far as rhythm guitar goes, Dime just loved James Hetfield. He said he had the fastest right hand in music.”

“Dime loved Ace Frehley – who co-wrote and sang this Kiss song – so we should have that on here too.”