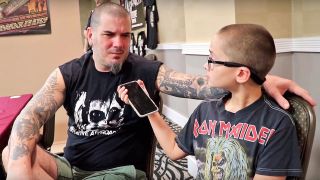 Former Pantera frontman Phil Anselmo has told a 12-year-old boy what he’d say to late bandmate Dimebag if he could speak to him.

The vocalist answered the query from Little Punk People interviewer Elliott at New Jersey’s Monster Mania convention over the weekend.

And he also revealed that the reactivated Superjoint Ritual, now known as Superjoint, will release their album Caught Up In The Gears Of Application on November 11.

When asked what he’d say to Dimebag if the guitarist could hear him, Anselmo says: “I would say, Bubba, I miss you so much, I love you so much. You feel like jamming?”

He adds: “If he could hear me, I’d have a lot more to say than just that. I’d have a lot to say, and a lot of it would be about jamming and about love.”

While confirming the Superjoint release date, Anselmo also discusses his other plans for the near future, saying: “I’ve got so much music that I’m about to dump on the public.

“There’s a lot of extremes. I’ve been doing this other trip down music that’s tough to put a fingertip on, but I’d say it’s something different. Just exploring music, which it should be.

Superjoint regrouped in 2014 before commencing work on the follow-up to 2003’s A Lethal Dose of American Hatred. Anselmo admitted last year that he didn’t remember much of their original era, and said the main difference now was “sobriety.”

He continued: “It feels like it’s fun again, and isn’t that the point? If you’re going to make music and you’re having fun while you’re doing it, nothing in this world can detract from that.”

Anselmo recently announced that his latest band Scour will make their live debut in Norway next year. He’ll stand in with Eyehategod at two shows this weekend. He predicted last month that Down would “come back together” in the aftermath of his “white power” outburst in January.