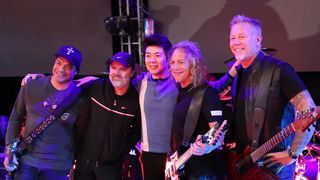 Metallica have released a pair of videos showcasing their January date in Beijing, China.

He can first be seen talking through ideas with the group before the performance – with later footage showing him playing the piano during Metallica’s One.

The band previously issued recap videos for their other Far East performances in Seoul and Shanghai. The shows were part of the band’s tour in support of 2016 album Hardwired… To Self-Destruct.

Last week, Metallica released studio footage from recording sessions for Am I Savage? from the album.