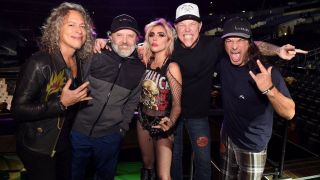 They played the track Moth Into Flame onstage at the ceremony is Los Angeles at the weekend, with frontman Hetfield forced to share the mic with Gaga at the start of the song when his mic stopped working.

Hetfield was then seen kicking over the mic stand and throwing his guitar off stage after the song. And while Ulrich was quick to shrug off the “technical snafu,” he reports Hetfield wasn’t quite so forgiving.

Ulrich tells The Late Late Show With James Corden: “In the heat of the battle, you’re out there, you’re playing. When it’s a technical issue, you don’t really know. Is it going to the house? Are the vocals going to the truck? Maybe it’s just the monitor – so you just gotta keep playing.

“We get off stage, we get back there and I haven’t seen him like that in 20 years. He was livid.

“He’s aged really well and is a pretty chilled guy – but the first five or 10 minutes in that dressing room was not a lot of fun.”

Ulrich adds: “But like they say, the show must go on. We fought through it and a lot of people said that it at least made for great television.”

Earlier this week, Ulrich called Gaga the “quintessential perfect fifth member of this band” and revealed he’d like to work with the star again at some point in the future.