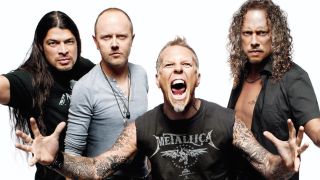 Metallica have released a pair of videos showcasing their January performances the Far East.

Watch both clips below.

The shows were part of the band’s tour in support of 2016 album Hardwired… To Self-Destruct. Those dates continue later this week, when they play four nights at Copenhagen’s Royal Arena, Denmark, before flying to Mexico and Brazil in March.

Drummer Ulrich previously revealed that the band were planning on Hardwired… To Self-Destruct to have a similar vibe to 2008’s Death Magnetic – until they played Kill ‘Em All in full live in 2013.

He said: “That was the first time I really got into that record. Early on I was dismissive, because Ride The Lightning and Master Of Puppets may be a little more intellectually stimulating and challenging. They were deeper records.

“When we played it I realised Kill ‘Em All had a cohesiveness. It had its own thing with the speed, but it’s simpler. The songs are longer but not quite as progressive. It’s a world all its own.

“There are some elements of that that rubbed off into this. I’d say there’s a trace of residue from rediscovering Kill ‘Em All that crept in.”

Metallica have been nominated in the Best Rock Song category for Hardwired at this year’s Grammy awards, with the ceremony due to take place on February 12 at the Staples Center, Los Angeles.

Following the event, they’ll play a set at the Hollywood Palladium – part of the the Citi Sound Vault live music series.