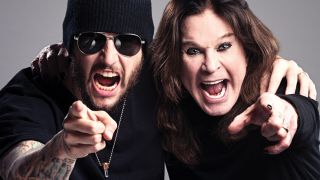 Just under two months ago, Metal Hammer was told our parent company was being shut down, and that we were out of business. Today, it gives us the greatest pleasure to officially bring you the brand new issue of Metal Hammer magazine – and it features one of our biggest exclusives ever and one of the most stacked issues we’ve ever put together.

This wouldn’t happen without the amazing support you have all shown us over these past weeks, so please, show our lovely new owners Future what’s up and get out there and buy this issue or subscribe. If you like what you see below, we have plenty more where that came from. And what a comeback issue it is…

So how do we start the comeback of the greatest metal magazine of all time? With Ozzy Osbourne’s final ever interview in the name of Black Sabbath! And it’s not just any interview, Avenged Sevenfold frontman M Shadows is asking him the questions! Two generations of metal superstar colliding in a world-exclusive that will never ever happen again. Coming face to face with the creator of heavy metal, M Shadows and Ozzy discuss Sabbath’s influence on Avenged, Bill Ward’s absence and Ozzy’s first encounter with Metallica. If you love metal, you need to read this.

You knew it was going to happen one day, and in South Korea two phenomenons came face to face. We head to Seoul with Babymetal to find out what on Earth it was like playing with the biggest metal band of all time, and how Babymetal are carrying the torch of heavy metal. In exclusive interviews with Su-Metal and Kobametal, we follow the Japanese sensations in their next steps toward global domination.

Love ‘em or hate ‘em, you can’t deny the impact and size of Steel Panther – but is the joke wearing thin? As the band gear up to release their fourth album Lower The Bar, we meet up with the LA throwbacks to discuss the act itself, why they keep it unscripted, and that being a ‘joke band’ isn’t as easy as you might think.

Thirty years ago, Judas Priest released the divisive Turbo album. Today we chat to frontman Rob Halford about the band’s decision to flirt with synthesisers and the personal battles he was facing at the time with drink and drugs. Knowing he had to get help, Turbo was a turning point for Rob and Priest, and we look back at the impact the album had on metal and the life of the man behind it.

Hardcore, metal, noise, punk… whatever you want to call it, Code Orange have written one of the best and most vital albums of 2017, and it’s only February! We talk to frontman Jami Morgan about where this heavy dose of violence came from, why he calls out rockstar bullshit, and why the band couldn’t give one solitary crap about what anyone thinks about it.

In a very special edition of Houses Of The Unholy, Slipknot and Stone Sour frontman Corey Taylor invites us into his house to show off his ultimate nerd den. From his Spider-Man pinball machine, his insane movie collection and his obsession with wolves – prepare to be jealous of the most metal geek in the world.

If you thought Doris was a step out of Suicide Silence’s comfort zone, you ain’t ready for what they have coming on the album. We find out what possessed deathcore’s biggest band to rip up their own rulebook and risk the wrath of their vocal fanbase. They didn’t hold back.

We also have this month’s free extreme metal magazine in the form of a bumper SUBTERRANEA! We delve beneath the depths to find the murky, Chthulu-inspired noise of The Great Old Ones, as well as more sounds from the underground in the form of Nidignr, Nicole Sabouné and much more.

But that’s not all! We’ve got loads from Alter Bridge, Asking Alexandria, Trivium, Beartooth AND MORE!

All of this and more is only available in the BRAND SPANKING NEW ISSUE OF METAL HAMMER! We’re back in business and we’re still defending the faith. Come party with us.

The new issue is in stores today and you can subscribe to Metal Hammer magazine right now.