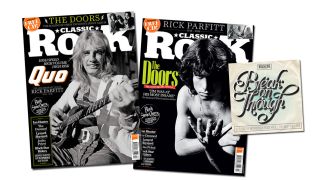 The Doors
Fifty years ago, Jim Morrison, Ray Manzarek, Robby Krieger and John Densmore shook the world with their amazing debut album, in the process making an icon of Morrison and heroes of them all. We look at the blood, sweat and psychedelia that went into it.

Rick Parfitt
The Status Quo legend passed away over Christmas, leaving a gaping hole in the rock landscape. Dave Ling looks back at his amazing legacy.

The Kentucky Headhunters
They’ve steadily built their name as mainstays of the southern rock scene (and one of their sons is in Black Stone Cherry).

Ian Hunter
He’s inspired a generation of punks and rockers with Mott The Hoople, made history with Bowie and cultivated a rich solo catalogue. Meet the hardest worker in rock’n’roll.

Gary Rossington
The Gospel According to the Lynyrd Skynyrd legend. Expect musings on rednecks, God and that plane crash.

Black Star Riders
They started out as a Thin Lizzy offshoot but, three albums in, Scott Gorham and co. have found their own identity.

Blackberry Smoke
What floated their boat when we took the southern rock fivesome record shopping for vinyl in Nashville? Find out here.

Dropkick Murphys
Ahead of their brand new album, the Massachusetts Celtic punks look back on an eventful life.

Lift To Experience
After a great debut in 2001 , disillusionment, drugs and death led to them splitting. Now the God-fearing Texans are making the most unlikely comeback since… well, you know who.

Break On Through
Comin’ at ya from all points of the compass, we bring you 15 tracks of brand new rock’n’roll to light your fire, including Motor Gun Hotel, Cold Black River, Reservoar Dogz, Exploding Lies and more…

The Dirt
Classic Rock returns thanks, in no small part, to Orange Goblin and the whole rock community. We salute you all… Welcome back The Godfathers, Chrome Molly and Dave Hause … Say hello to Aaron Keylock and Gone Is Gone, say goodbye to Rick Parfitt, Overend Watts, Mike Kellie, George Michael…

The Stories Behind The Songs: Cinderella
Don’t Know What You Got (Till It’s Gone) was the power ballad that put these glam metallers in the charts. But how did it all start?

Q&A: Steve Jones
As he gears up for the release of his superb new autobiography, the former Sex Pistols guitarist opens up on a whole range of subjects.

Six Things You Need To Know About: Deaf Havana
Meet Norfolk’s Springsteen-loving balladeers as they prepare to release their heartfelt new album.

Buyer’s Guide: Judas Priest
Wondering where to start with the kings of heavy metal? Our definitive record-buying lowdown will show you.

Subscribe to Classic Rock Magazine at My Favourite Magazines.